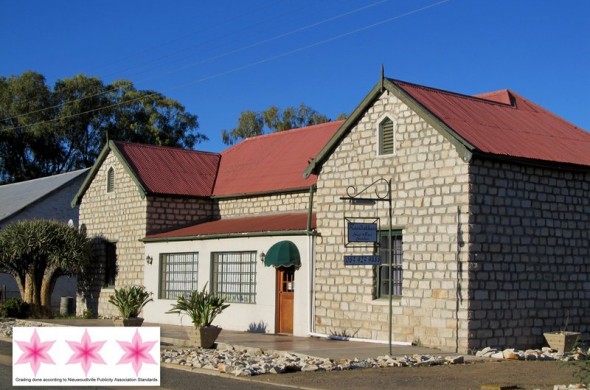 ‘Rooidakhuis’ is a family run business situated in a traditional sandstone building, dating back to 1895. Situated in Nieuwoudtville, the heart of the bulb world, the ‘Rooidakhuis’ was started owing to a shortage of accommodation and restaurants in town. Available history on the building itself is very vague, but there are a few reliable facts, which prove the previous use of this building. According to the people who lived here during 1915 and 1935, it was the first police station in Nieuwoudtville. The two jail cells (now used as a public toilet, storage and restrooms) at the back of the building prove this fact. They are now joined to the main building via the kitchen. After a query in 1999, the South African Police Service confirmed this fact with plans from their archives, which concur with the layout of the Rooidakhuis.

According to Nieuwoudtville residents, the ‘Rooidakhuis’ served as a boarding house for a couple of years. Apparently it also housed the business of a mortician who stored coffins in the attic. There is no specific reason for the name of the ‘Rooidak’ Guest House. During earlier years it was always referred to as the house with the red roof and consequently we decided on the ‘Rooidakhuis’.

This house consists of three en-suite double rooms and two en-suite single rooms. We use only the best quality white percale linen to give you the feel of luxury. Electric blankets and good towels complete the picture. There is also a lounge with a cosy fireplace and DSTV for guests. Breakfast is served in our dinning room.

People at the ‘Rooidak’ Guest House go out of their way to make guests feel at home and provide them with the best of service that Nieuwoudtville can bring.

We require a 50% deposit to confirm a booking.

We are not licensed and guests can provide their own drinks.

NO SMOKING rule is applicable in all accommodation types.

Tantelise your taste buds with dishes true to our region. Taste

Unique to our region that focus mainly on our beautiful flowers. Enjoy